Axel Sowa, Susanne Schindler
Letter from the Editors No. 5

Reyner Banham turns to the architect Peter Smithson to conclude his preface to the German edition of his book The New Brutalism. Ethic or Aesthetic?, which appeared at the same time as the English version in 1966. He quotes Smithson as saying that whoever attempts to translate Banham should be honored for courage. While Banham uses Smithson’s comment to thank the publishing house, editor, and translator, Smithson most likely intended to underline that any attempt to translate Banham’s polemical and linguistically virtuous prose was doomed to fail. At least Smithson considered the attempt worth the effort.

Or does courage here refer to surmounting cultural boundaries and patiently eliminating misunderstandings? Any translation is an act of interpretation. Ambiguities are typically lost and arguments are rendered more precise, whether the author likes it or not. Every interpretation occurs on the backdrop of its local and temporal context.

In this issue, Claire Zimmerman analyzes Banham’s postulation of the relation of image and building to Rudolf Wittkower’s teaching, as put forward in Banham’s 1955 essay “The New Brutalism.” We realized that Banham’s essay had never been translated into German and decided to have it translated. Not because Banham has, in recent years, become something of a cult critic. Rather, because his thoughts are intrinsically related to current debates in visual studies and architectural theory.

Picking up on Smithson’s suggestion, then, we would like to thank Joseph Imorde for his courageous translation of Banham’s essay, and, of course, for his translation of Zimmerman’s piece. We would like to thank Matthias Müller for his virtuous translation of Ian Pepper’s interpretation of the work of a U.S. artist, Richard Serra, interpreting and altering the work of Robert Maillart, a European engineer. The question of transatlantic adaptability, this time of housing prototypes, also plays a central role in Kim Förster’s oral history of the only realized building by the legendary Institute of Architecture and Urban Studies in New York (with linguistic support from Alta Price).

Müller receives a second round of thanks for his translation of five short stories that capture the imaginations of Philip Allin, Pedro Gadanho, Susana Oliveira, Katherine Romba, and Maria Smith. (Katherine Romba’s story was the inspiration of this series of shorts.) Annette Wiethüchter is responsible for keeping the micro-essays by Mario Carpo, Yanni Alexander Loukissas, Fabian Scheurer, and Lara Schrijver not only intelligible in a different language, but entertaining.

Although the world of scientific research is so well connected today, we are not in favor of a scientific Esperanto, a new lingua franca, or any other leveling standards. Rather, the diversity of languages and their contexts is a significant factor in the processes of understanding and the production of knowledge. In this sense, Candide challenges readers and authors to see translation as a productive way to engage in the criticism of and dialog on architecture. 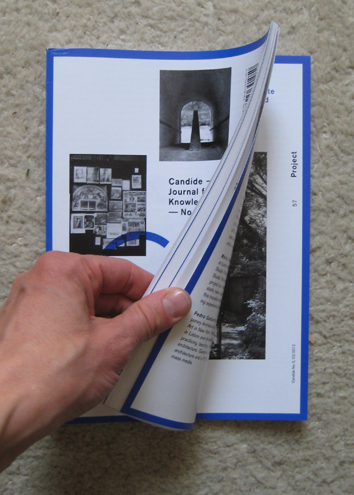